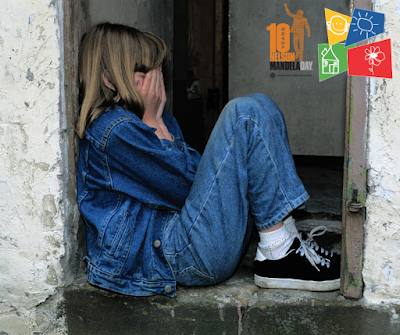 *Abigail was born into a single-parent family. Her father disappeared from the scene before her birth. She never knew him. For the first 5 years of her life, it was just her and her mommy. But in a few seconds, her whole life changed. Her mother committed suicide. The pressures of life and being a single mother overwhelmed her. She hanged herself in front of 5-year old Abigail.

Soon after Abigail was placed in foster care with family. Nobody talked about her mother and everybody sighed a sigh of relief - according to them she was too small to understand or to be impacted by her mother’s death. Abigail became more and more withdrawn in all aspects of her life. At school, she was a loner and not interested in making friends. Her school grades reflected that she had no interest in schoolwork. She did not answer when spoken to and refused to be part of the family activities. Her foster parents experienced her behaviour as disrespectful and saw her as a problem child. She was sent to other family members...and then other family members... The negative circumstances increased and followed her as she withdrew more and more into her own secluded world.

When she was 10 years old she was sent to live with an aunt that resides in an area where Child Welfare Tshwane is the designated child protection agency. The aunt was concerned about Abigail and felt that she needed help. She contacted Child Welfare Tshwane and while helping the aunt to legalize foster care for Abigail, Abigail was referred to the Child Welfare Tshwane therapy unit. Part of the therapy process is a socio-emotional evaluation which is a standard evaluation of how a child experiences their life in the world. The evaluation strongly indicated that nobody helped Abigail at any stage to process the death of her mother.

Trauma debriefing and bereavement counselling followed. Therapy to improve her emotional awareness equipped her and suddenly Abigail could name the feeling that she carried inside of her body since that day. Grief. Intense grief. The therapist walked with her through the grieving process. The foster family was also part of the therapy process. It helped them to understand Abigail and equipped them better to care for her.

There is nothing unusual about the group of girls that sit in a circle on the grass. They are chatting, smiling, and laughing like young girls do.  But for one of them, every word and every smile and every interaction is regaining what she lost when she was 5 years old. Now Abigail is making friends, an active partaker in school, and an integrative part of her foster family. Abigail is alive again.

How does a 5-year-old survive when she sees her mother committing suicide?  Barely, just barely...until somebody listens; until shoulders pick her up and carry her to understanding and healing of unspeakable trauma.

Posted by Child Welfare Tshwane at 05:58