Ebony and Ivory – a story of transformation 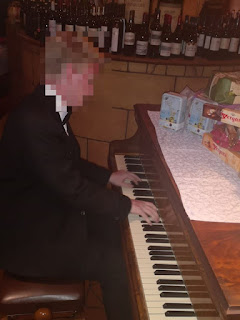 In August 2018 a young man walked through the gate, shoulders hanging.  He avoided eye contact and when he did make contact, he blushed.  We welcomed him with a smile and open arms but not without concern about his future.

He is a very talented young man, attending a prominent Afrikaans school in Pretoria and was in grade 11. The months leading up to his admission had been some of the most trying times in any persons’ life.  His father was in jail for a crime he had committed, and he had no contact with his mother.  At this uncertain time in his life, when he needed parents to guide and support him, he was alone.

But Bramley became the new home for this child.  He made friends, bonded with his house mother and connected to a lady who saw his potential and is doing everything possible to set him up for his future. As a pianist his passion is to study music after school – and this is where he found his peace during this turbulent time in his life.

Over the months we have seen him transform from a dark, lonely child to someone with confidence, walking in the light. He is self-assured and looks the world straight in the eye.  His posture has changed, and he is now walking with his shoulders high and straight.  He looked so handsome at his matric farewell and even had the courage to ask a girl to accompany him!

What has happened to this boy is what we hope to see every time we admit a child to Bramley.  Working with him to cope with his troubled youth and giving him back the ability to dream.  We have spent hours in consultations and therapy with him understand that his past does not define his future. Therapy helped him to deal with his situation and realising his strengths and limitations. He was supported by the Social worker, his therapist as well as the caring teachers at school.

It was also rewarding for the big sister and other people involved with him, to see how this child opened his mind to positive influences.  He grabbed every opportunity on offer to improve himself, to have fun and enjoy the moment when sponsors or donors brought gifts or visited the Home.

And this again proves that the road to recovery is a two-way process. As much as we invest in the child, the child also needs to invest in him/herself.  If the child ignores the opportunities or does not want to work with the social worker in the programme, there is not much that can be done to change the child’s future.

Today he is writing his final matric exams.  And although the future is not looking all rosy for him, we are confident that he will use the chances he gets to improve himself and work towards a better future.  There will still be days he will ask “why me” but there will be days when he will say “thank goodness it was me”.   The process of healing is far from complete.  There are still issues he needs to work through.  But his admission to Bramley came at exactly the right time – we could still help him become the person he should be!

In his own words: People are always afraid of the unknown.  This is also how I felt when I heard that I would be staying in Bramley Children’s Home. I feared how the other people will be.  The staff was beyond kind! They made me feel welcome, the house parent was kind and welcoming too. To my surprise, I was accepted by the children when they arrived home from school.  I have made more than friends – I have found brothers!

Posted by Child Welfare Tshwane at 05:01