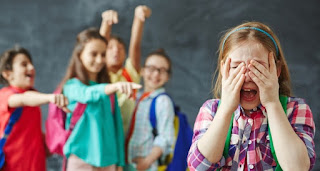 It is safe to say that most parents are sick and tired of being confronted with the reality of bullying at schools and in communities. The thing is, many parents get bullied at work as well and it would then make it hard to really think rationally about it when their own children are involved – whether their children are the one who bullies or gets bullied.

Many conversations, discussions, and meetings have been held globally to discuss bullying as a social phenomenon and it barely looks like much has changed if we look at what gets broadcast on social media on such a regular basis, including videos where children get badly assaulted or even killed by fellow learners. In America, it has somehow gone so far that learners get shot at schools, leaving the whole country to scratch their heads, trying to strategize what they will do and how to prevent this from happening.  In our country, it is not that different. There is however not a quick fix for this issue.

What always strikes my attention when we conduct specialised socio-emotional assessments on children from various age groups and come across information where the child discloses being bullied or being the one who bullies other children, is that most of the time both parties have quite a sad background, including some past trauma like loss, domestic violence, regular verbal arguments between parents that frightens the child that they will end of getting divorced and then when parents actually get divorced, amongst other things as well.

In my articles to come, the reasons for children practicing bullying behaviour, signs to look out for that could indicate that your child might get bullied, what you can do if you find out your child gets bullied and how to try to prevent this, will be discussed.

In a nutshell, bullying can be described as a repetitive and deliberate act to harm another with the unconscious attempt to gain control and dominate.

Direct:
Physical – aggressive act towards another such as punching, kicking, slapping, pinching, throwing an object towards another etc.
Emotional – to humiliate another, exclusion, intimidation and threatening
Verbal – swearing and using degrading or discriminating words towards another
Cyber – making use of social media to verbally and/ or emotionally attack or humiliate someone – the attempt here is to degrade someone in a large crowd or to scare and degrade someone specific through direct individual text messages or to threaten someone to expose inappropriate or sexually explicit photos of them

Indirect:
To incite people against someone specific with the intention to cause the other person to feel isolated or to spread gossip with the intention to turn others against someone.
It is important to never underestimate the impact of bullying on a child and to be attentive to the possible signs that could indicate a red flag that a child gets bullied. I will therefore cover all the signs of bullying in my next article.

Posted by Child Welfare Tshwane at 07:30